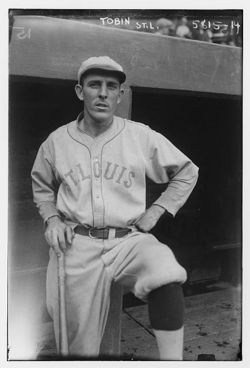 "(Baby Doll) Jacobson (was) part of a great outfield including Ken Williams and Jack Tobin." - from Rob Neyer's Big Book of Baseball Lineups

Jack played independent ball in 1913 and then became part of the new 1914 Federal League. He led the 1915 Federal League in hits, and when the league folded he joined the 1916 St. Louis Browns. He did not hit well for them, however, and spent 1917 in the minors with Salt Lake City, hitting .331. Morrie Rath, several years older, was the team leader at .341.

Jack came back to the Browns in 1918 and stayed with them through 1925. He was several times among the league leaders in batting average, and in 1921 led the league in at-bats and triples.

Before the 1926 season he was traded to the Washington Senators, who released him in mid-season. He spent his last 1 1/2 major league seasons with the Boston Red Sox. In his last season, in 1927, he hit .310, by far the highest average on the team, although he showed little power.

He is not to be confused with a later player, Jackie Tobin.

This manager's article is missing a managerial chart. To make this person's article more complete, one should be added.
Retrieved from "https://www.baseball-reference.com/bpv/index.php?title=Jack_Tobin&oldid=1085314"
Categories: