Note: This page links to Ken Williams, slugger of the 1910s and 1920s. For others with similar names, click here. 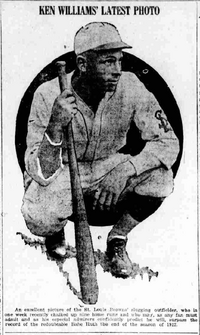 "Ken Williams slugged 196 homers and ranks as the fifth best HR hitter of all time based on the number of four baggers hit divided by the league average for outs and plate appearances." - from a 2003 article by Rich Lederer

He had his major league debut with the 1915 Cincinnati Reds after hitting .340 for Spokane during the first part of 1915. Tommy Leach, at the time 37 years old, wasn't hitting too well for the Reds, and Williams was given a lot of games in the outfield after his debut with the Reds in the middle of July.

Ken was born in Grants Pass, OR. After baseball, Ken returned to Grants Pass where he and Hub Pernoll ran The Owl Club and Billiard Parlor for many years.