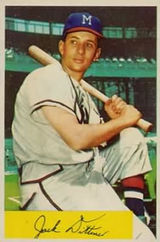 Jack Dittmer was a graduate of the University of Iowa where he earned nine letters playing baseball, basketball and football. Before the 1950 season, he signed as an amateur free agent with the Boston Braves and was assigned to the Denver Bears where he played second base and hit .373 in 72 games. The Atlanta Crackers had him in 1951 where he played second and third base and he responded with a .334 batting average.

In 1952 he was with the AAA Milwaukee Brewers and after 57 games he was hitting .356 and was called up to the Braves where he struggled with a .193 average in his initial big league season. He improved to .266 in the 1953, the Braves' first year in Milwaukee, but after three more years in a diminished role, he closed out his big league days with the Detroit Tigers in 1957 with a .232 major league career batting average.

Dittmer finished out the 1957 season with the Birmingham Barons, getting into 75 games and hitting .309. Jack continued playing in the Pacific Coast League with the Phoenix Giants in 1958, hitting .315 in 109 games and wound up his pro baseball career in 1959 with the Seattle Rainiers and the Sacramento Solons, hitting .249 in 124 games.

After baseball Jack took over the family automobile dealership in his hometown of Elkader, IA.