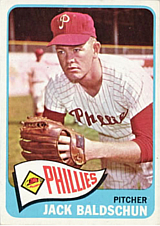 “He has a rubber arm, he makes the batters hit the ball on the ground, [and] he has the ideal temperament and confidence.” - Gene Mauch

Jack Baldschun led the National League in appearances his rookie season, appearing 65 times for a dreadful Philadelphia Phillies squad that finished 47-107 in 1961. He became the team's closer the following season, leading the bullpen in saves each year while gradually falling out of favor with manager Gene Mauch during the team's epic 1964 meltdown. Following the 1965 season, he was flipped twice, first to the Baltimore Orioles and then to the Cincinnati Reds as part of the return for the legendary Frank Robinson. He spent the remainder of his career fighting for time with the Reds and expansion San Diego Padres.

With the Friars on July 21, 1970, Jack entered a game in the top of the 9th inning with a no-hit bid alive, after manager Preston Gomez lifted staring pitcher Clay Kirby for a pinch-hitter in the bottom of the 8th, having allowed a run but no hits to the New York Mets, in what was a highly controversial decision. Baldschun allowed a single to the first batter he faced, Bud Harrelson, and by the time their turn at bat ended, the Mets had scored twice on two more hits and an intentional walk. The Padres went down in order in the bottom of the inning and lost, 3-0. That game has become infamous in Padres' lore, as many fans believed it cursed the team, preventing any pitcher from ever throwing a no-hitter for the Friars; indeed, only one other pitcher has even made it to the 9th inning without allowing a hit since that fateful day.