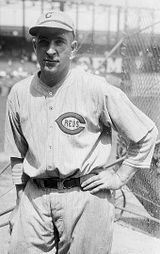 Shortstop Ike Caveney played for the San Francisco Seals from 1919 to 1921 before spending four years as a starter for the Cincinnati Reds. In 466 big league games, he hit .260/.307/.354. He then returned to the Seals and managed the club for three years. While skipper, he was Joe DiMaggio’s first manager. Caveney's minor league playing career lasted 17 seasons, of which he spent ten with the Seals. He also had several years with other teams in the Pacific Coast League.