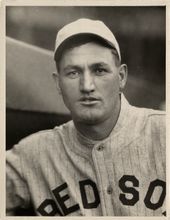 Ike Boone had a .370 career minor league batting average, the highest of all-time.

In 1929, Boone had one of the great seasons of all-time for the San Francisco Missions. He hit .407 with 323 hits in 754 at bats. Included in his many hits were 49 doubles, 8 triples and 55 home runs, and he drove in 218 runs in 198 games. These numbers were good enough to establish the season high total bases record of 553. The next year, 1930, all Ike did was hit .448, and drive in 98 runs in only 83 games. Ike might have had more but these numbers were good enough to get a promotion to the Big Leagues again - this time with the Brooklyn Robins.

Ike hit well during his years in the majors but apparently his iron glove and lack of speed were enough to keep him out of there. He was a regular in the outfield for the Boston Red Sox in 1924 and 1925, hitting .337 and .330 respectively with an on-base percentage over .400 both years, but he was back in the minors in 1926. The Red Sox finished 7th and 8th those two seasons, and, like many bad clubs, focused on what Boone's limitations were instead of his obvious hitting talent. His major league batting average of .321 over eight seasons pulls his combined major/minor batting average down below Ox Eckhardt and Ty Cobb, but still the third highest ever.

He played right field and managed Toronto Maple Leafs of the International League in 1934. Ike managed for Toronto from 1934 through 1936, as well as the Jackson Senators of the Southeastern League in 1937.