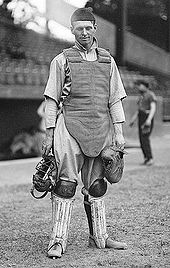 Henri Rondeau, who was born in Connecticut, played three seasons in the major leagues but also played from 1913-1924 with the Minneapolis Millers.

He was the same age as Ty Cobb, and broke in with the Detroit Tigers in 1913, when his teammate Cobb hit .390. Rondeau was primarily a catcher at the major league level that year.

He had previously been with Jersey City in the International League in 1912, and was drafted in September that year by the Washington Senators, who sold him to the Tigers two days later. He came back to the majors in 1915 and 1916 as an outfielder with the Washington Senators, during the time of the Federal League. He played mostly left field, where Howie Shanks was the regular.

Rondeau was of French-Canadian background. His spouse was Marianne Côté and he had three daughters, Fleurette, Constance and Henriette.

During his many years at Minneapolis, his manager for almost the whole time was Joe Cantillon.

Nearly 100 years later, a writer with MLB.com had a column to write about a game played during tropical storm Henri, and decided to look up whether there had ever been a major league player named Henri. Rondeau was the only one, so the writer started his story by talking about the only Henri in the major leagues. See Lilly leaves Tampa Bay all wet, by Kent Schacht.