Note: This page discusses 1950s infielder Hector Rodriguez. For others with the same name, click here. 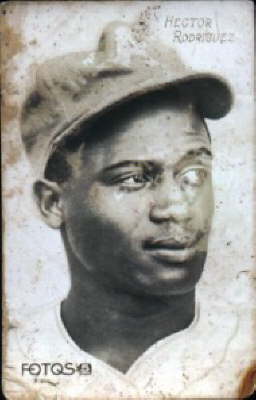 Héctor Rodríguez had a long minor league career and had two years in the majors, one with the New York Cubans in 1944 and one as the regular third baseman for the Chicago White Sox in 1952.

Rodríguez began his pro career in 1943 with the Mexico City Reds of the Mexican League. He moved on to the Negro National League in 1944, playing for the New York Cubans and hitting .283. After several more seasons in Mexico, he joined the Montreal Royals in the Brooklyn Dodgers chain in 1951. Appearing in 153 games, he hit .302 with 10 triples, 8 home runs, and 95 runs batted in, led the International League with 26 stolen bases, and was named the circuit's Rookie of the Year.

Acquired by the Chicago White Sox prior to the 1952 campaign, the 31-year-old rookie Rodríguez was the team's Opening Day third baseman. He appeared in 124 games for the club that summer and hit .265 with 14 doubles and 1 homer. However, his big league time was short-lived, and he was back in the minors in 1953. After spending one year with the Syracuse Chiefs, he played the next six seasons with the Toronto Maple Leafs. He played for the San Diego Padres of the Pacific Coast League in 1960 and 1961 before returning to Mexico, where he both played and managed.

Overall, Rodríguez recorded 2,390 hits while playing in the International League, Pacific Coast League, and Mexico and had a career average of .290. He also recorded 313 doubles and 226 stolen bases during his long minor league career.