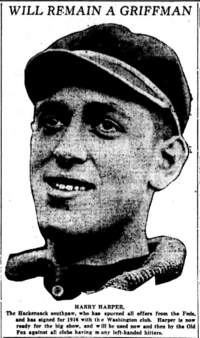 Hackensack Harry Harper pitched 10 years in the majors, mostly with the Washington Senators.

After baseball he was Bergen County Sheriff and then ran for State Senator, losing the election. He was then appointed a state Civil Service Commissioner and later a Commissioner of Labor and Industry. He ran for the U.S. Senate in 1948 but lost the primary. In 1950 he lost a Republican primary in a close race for a Congressional seat.

Harper then devoted his efforts to building number of companies.