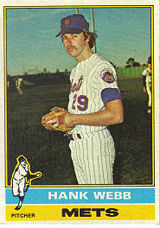 Following his big league days, Webb played for the Miami Amigos of the short-lived Inter-American League in 1979.