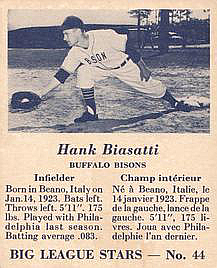 Hank Biasatti played 6 games in the NBA and 21 games in the major leagues. He was inducted into the Canadian Basketball Hall of Fame in 2001. One of the few major leaguers to have been born in Italy, he lived next door to Reno Bertoia in Windsor, ON, when Bertoia was growing up. A first baseman by trade, Hank had his cup of coffee with the Philadelphia Athletics in 1949 while Ferris Fain was the regular first baseman. Biasatti drew 8 walks but rapped only 2 hits. He played for the Drummondville A's in Quebec's Provincial League in 1954 and also was the team's manager.

As a basketball player, he was a member of the Toronto Huskies at the start of their inaugural - and only - season in the Basketball Association of America, which became the NBA in 1949 following a merger with another professional basketball league. He took the floor in the league's first official game, played on November 1, 1946, with Toronto hosting the New York Knickerbockers at the Maple Leaf Gardens.