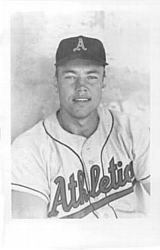 "I was in spring training with Brooklyn one year and I had a good spring and thought I was going to make the team. But I came into a game and gave up a monstrous home run to Hank Aaron and was sent back to the minors the next day." - Glenn Cox

After baseball, Cox ran an 80-unit apartment complex called Camelot in Whittier, CA from 1961 until 1972, when he bought a fishing resort on the Sacramento River called Hidden Harbor. He was also in the carpet business from 1974 to 1980. From 1980 to 1993, he was the head baseball coach at Los Molinos High School and also helped coach the basketball, volleyball, and football teams. Cox passed away in early 2012 at age 80.