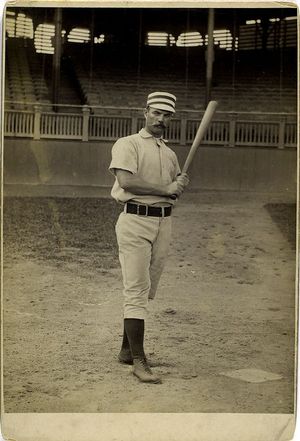 George Wood was a regular outfielder in the major leagues for nearly all of his 13-year career. Although his teams did not win championships, many of them were competitive.

Wood broke in at a time when fewer games were played in a season. In his first four years, he played in less than a hundred games each season, but that's because the schedule was shorter - he was appearing in virtually every game his teams played.

He started with the Worcester Ruby Legs in 1880 (although born in Prince Edward Island, he was from Boston, MA), and hit .245 on a team that hit .231. He then moved to the Detroit Wolverines for five years, hitting well each year. Even in the year that looks the "worst", 1882, his .269 batting average was well above the team average of .230, plus he led the league in home runs and was second in triples.

He spent the years from 1886-1891 in Philadelphia, PA except for 3 games with the Baltimore Orioles in 1889. During that time, he played in the city of brotherly love for all three of the teams in the National League, the Players League, and the American Association. He was past his prime, but still put together some decent years. For example, in 1891 he hit .309 with 14 triples for the Philadelphia Athletics of the American Association and also managed the team for most of the year.

Lifetime, he appeared in 5 games as a pitcher, pitching 12 innings, but was not effective. His fielding percentage was under .900 as an outfielder, but was above average. He was used as a fill-in umpire three times between 1886 and 1891, then in 1898 was a full-time umpire in the National League, specializing as a base umpire.