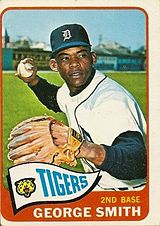 George Smith played four years in the majors, most notably serving as a regular on the Boston Red Sox in 1966.

In August 1963 the Tigers brought George up to play second base, and in the remainder of the season he appeared in 52 games, getting 171 at-bats. Jake Wood had been the regular second baseman for the first part of the season.

In 1964 George was mostly back in the minors, coming up to the Tigers for only 5 games as the Tigers used Jerry Lumpe at second base. Lumpe continued as the regular in 1965 while George was in 32 games for the Tigers.

He was traded to the Red Sox in the off-season. The Red Sox later traded their 1965 second baseman, Felix Mantilla, and George became the team's regular second baseman in 1966 under their manager, Hall of Fame second baseman Billy Herman. He played in the minors in 1967 and 1968.