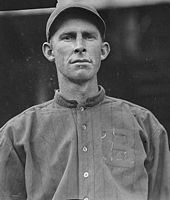 Gene Cocreham pitched parts of three seasons with the Boston Braves, receiving 15 of his 17 appearances with the Miracle Braves squad of 1914. In 54 2/3 innings, he finished 3-5 with a 5.27 ERA. Much of his minor league career was spent playing for teams in Texas, Kansas, and Kansas City, Missouri.

Cocreham was from Luling, TX, which is east of San Antonio and south of Austin. The book Luling contains a 1909 photo of a men's musical band that has four Cocrehams in it, including Gene Cocreham, presumably this one, holding what looks to be a tuba.