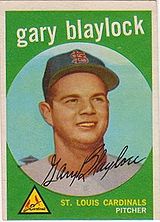 The St. Louis Cardinals signed 19-year-old Gary Blaylock as an amateur free agent in 1950 and promptly shipped him to the Class D Johnson City Cardinals, where he went 6-4. The righty was with the same team the following year, leading the Appalachian League in strikeouts (248) while finishing 23-6 with a 2.61 ERA. Gary spent seven more seasons in the minors before getting his shot at the big league hitters. His hard work for the Columbus Red Birds, Omaha Cardinals and the Rochester Red Wings AAA clubs earned him his opportunity to see Sportsman's Park. After going 4-5 as a spot starter and reliever with the Cardinals at the start of the 1959 season, the New York Yankees claimed him on waivers at the end of July. He lost his only decision in 15 games for the Yankees. This was to be Gary's only chance at the majors.

Blaylock spent four more seasons in the minors as a player. He finished his playing career with three years in the International League with the Richmond Virginians and a 1963 with the Fort Lauderdale Yankees. His career minor league stats include a 128-111 record and a 3.72 ERA.

Gary became a minor league manager, starting in 1963 and enduring until 1975. He also was a longtime minor league pitching instructor before returning to the majors as pitching coach for the 1985 World Champion Kansas City Royals. Blaylock spent 1984 through 1987 on the K.C. staff. He remained in baseball as an advance scout for the Royals and lives in Malden, MO.