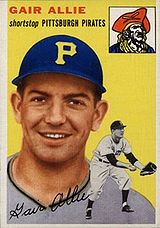 Gair Allie was the regular shortstop for the Pittsburgh Pirates in 1954 in what turned out to be his only season in the big leagues. His one season career is like that of Sparky Anderson, who had the same experience with the 1959 Philadelphia Phillies.

Dick Groat had come to the Pirates in 1952, but was unavailable in 1953 and 1954 as he was fulfilling his military service. When Groat came back to the Pirates in 1955, he became the regular shortstop. Allie served in the military as well, in 1957, when he was back in the minor leagues. Allie's range was above average at shortstop, but he hit only .199. To some extent, he made up for it by getting an above average number of walks and added 6 triples. However, he was third in the league in strikeouts and his on base percentage was poor. For the last seven years of his professional career he struggled in the minors, trying (unsuccessfully) to get back to the majors.

Allie had been at Wake Forest University, a North Carolina university, in 1951. Since Dick Groat had been at Duke University at the same time, the two might well have played against each other. Allie played for the semipro Stellarton Albions of the Halifax and District Baseball League hitting 19 home runs in 1951. He was assigned to the New Orleans Pelicans in 1952.