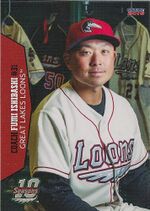 Prior to playing in the United States, Ishibashi played for the Kochi Fighting Dogs in the Shikoku-Kyūshū Island League. After serving as bullpen catcher and Japanese language interpreter for the AZL Dodgers, he became a Los Angeles Dodgers bullpen coach in May 2012. He was then a coach for the Great Lakes Loons in 2016-2017. He managed the DSL Dodgers 2 in 2019 and was a coach for the ACL Dodgers in 2021-2022.