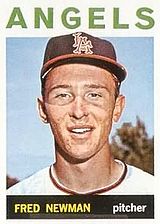 Fred Newman was a pitcher with a good sinker and excellent control who had two very promising seasons for the Los Angeles Angels in 1964 and 1965. Arm troubles surfaced in 1966 and he was never able to recapture his earlier success.