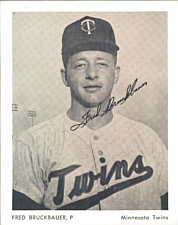 Pitcher Fred Bruckbauer was a star at the University of Minnesota, going 16-5 for the Golden Gophers before signing with the Washington Senators in 1959. He was named the Outstanding Rookie of the Three-I League in 1959 while pitching for the Fox Cities Foxes. He reached the majors with the club, by then the Minnesota Twins, in 1961 and appeared in just one game. He gave up three hits and a walk, allowed three runs, and did not record an out. He is sometimes credited with being the last pitcher to retire with an infinite ERA. However, Vic Davalillo, normally a position player (over 1,400 games), appeared in two games in 1969 as a pitcher and also retired with a career ERA of infinity. Bruckbauer's baseball career was cut short by injuries, and he later worked for John Deere for more than 30 years.