This Salt Lake City franchise has never used "City" in its locale name, and on that date Bees ownership - the Larry H. Miller Co. - announced it will let the current lease expire after the 2024 season and move the team nearly 20 miles south into a privately financed playpen to be built by LHM in the South Jordan, UT, planned-development community of Daybreak.[1]

The move was all but outed more than four months earlier when some Utahns connected some dots.[2]] Nearing the end of its third decade, Smith's had reached a point at which many ballparks need renovation or replacement, and MLB likely exacerbated that by including new standards in its 2021 Minor League Reorganization. Just weeks into the 2021 season, the Miller Company bought 1,300 acres of undeveloped land in Daybreak.

Smith's - then Franklin Covey Field - kept baseball downtown in 1994 as the same-site replacement of Derks Field - which had stood on the same spot since 1915. The HOK Sport (now Populous)-designed stadium lured the Portland Beavers south, early in HOK's rise as a renowned ballpark architect. In the heart of Utah's capital - less than three miles from both the Mormon Tabernacle and the world's leading genealogy center, and less than 15 from Great Salt Lake - its view of the Wasatch Mountains is one of the best backdrops in professional baseball. Leading the PCL in attendance its first five seasons, the playpen's ball club drew its 10 millionth fan to a Salt Lake City professional baseball game in 2013 - faster than any previous PCL team, but later improved upon by the Memphis Redbirds. 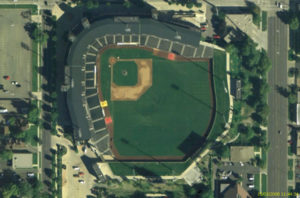 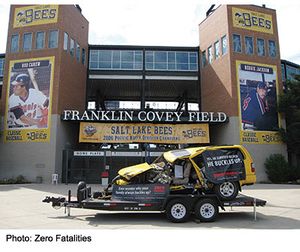 Front of the stadium with a safe driving display.
Retrieved from "https://www.baseball-reference.com/bpv/index.php?title=Smith%27s_Ballpark&oldid=1263685"
Categories: