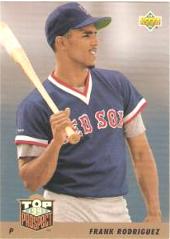 The Boston Red Sox drafted Frank Rodriguez out of high school with their 2nd round pick in the 1990 amateur draft, but he elected to go to junior college in 1991. Rodriguez led the JUCO ranks in home runs (26) and pitching strikeouts (139), and was named MVP of the Junior College World Series, when Howard College beat Manatee Community College in the title game. The Red Sox signed him nine hours before they would lose his rights and he would enter the 1991 amateur draft. Boston promised to let him start his career as a shortstop.

Rodriguez's other 1991 major career highlights include being named college player of the year by Baseball America; being the Texas state regional tournament MVP; being named MVP of Howard College's baseball team; receiving an invitation for the Team USA Pre-Olympic tryouts; establishing new records for victories and strikeouts in a single season; establishing new records for home runs and RBI's at Howard College; leading the nation in homers with 26 and RBI's with 90; being nominated for the Dick Howser Trophy.

Rodriguez began his pro career in the Boston Red Sox organization in 1992, with the Class single-A Lynchburg Red Sox of the Carolina League. Rodriguez was promoted to Class AA the following season, 1993, were he played for the Eastern League's New Britain Red Sox. Once again, Rodriguez was promoted the following season, this time to AAA, where he played for the International League's Pawtucket Red Sox in 1994.

In 1995, Rodriguez saw limited playing time in the minors - just 13 games with Pawtucket - before his call-up to the majors. Rodriguez played only 8 more games after his debut with the Red Sox. He finished out the season with the Minnesota Twins, after being traded for Rick Aguilera on July 6, where he saw action in 16 games. He saw a more full-time role with the Twins over the next two seasons, playing at least 30 games a season. In 1998, Rodriguez once again saw playing time in the minors with the Salt Lake Buzz of the AAA Pacific Coast League for a total of 16 games. However, he spent most of the season (20 games) with the Twins.

In 1999, Frank Rodriguez began the season in the minor leagues with Salt Lake, where he played in just 9 games. He made a return to the majors, this time with the Seattle Mariners. In 2000, he saw playing time once again in the minor and major leagues, playing with the Mariners (28 games) and the Tacoma Rainiers (9 games) of the PCL. 2001 marked the end of Rodriguez's ten-year pro career. Now under contract with the Cincinnati Reds, he would only play 7 games with the major league team, but got into 43 games with the AAA Louisville Riverbats of the International League.