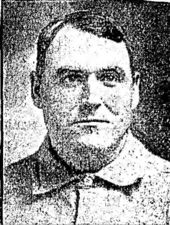 Frank McPartlin pitched one game for the New York Giants in 1899. He also played 15 seasons in minor league and independent ball, winning at least 140 games. He had a number of impressive seasons with the best being 1901 when he was 22-10 for the Rochester Broncos, and then, as if that weren't enough, he also was 10-1 the same year with the Los Angeles Angels. In 1902, he threw a no-hitter for the Angels against the Oakland Dudes.

"The club (the 1899 New York Giants) let A GOOD MAN GO when It turned southpaw McPartland (sic) loose because they considered his terms too high. Hanlon (of the Brooklyn Superbas) wanted to sign him upon the condition that he agree to be farmed out until next season. McPartlin refused to sign on such terms, and came over here, and showed up to the satisfaction of all the local players in practice; his terms were considered too high and he quit. McPartlin lives here, and is a left-hander of nerve and ability, and should have been put right into harness." - commentary written by Sporting Life's New York correspondent on Aug. 21, before McPartlin pitched his game for New York on Aug. 22, and appearing in the Aug. 26, 1899 issue