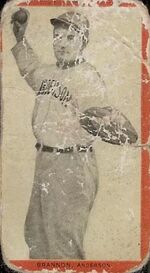 He managed the Wilkes-Barre Barons for part of the 1924 season, replacing Tom Downey and being replaced by Joe Wall.

His birthyear has also been listed as 1890.