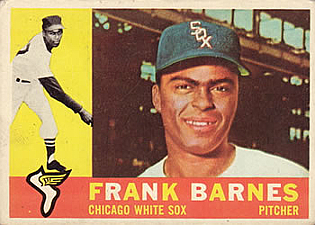 Frank Barnes started out at the age of 18 with the Indianapolis Clowns of the Negro American League in 1947. He was with the Kansas City Monarchs before being purchased, along with Elston Howard, by the New York Yankees. He was never able to reach the majors until late 1957 when he was brought up by the St. Louis Cardinals. This was just after his 2.40 ERA for the Omaha Cardinals led the American Association. He also led the league with 6 shutouts while setting another league record by hurling 41 consecutive shutout innings. Frank, who threw a no-hitter for the Oklahoma City Indians of the Texas League in 1955, had a second no-hitter while with Omaha in 1958. In 1958, he was with with the Cardinals long enough to win his only big league game in four decisions and to be used as a pinch-runner for Stan Musial following "The Man"'s 3,000th career base hit. He had one last brief stint with the Cardinals in 1960 before pitching for several more years in the Mexican League.

Following his playing days, Barnes retired in Greenville, MS, where he owned a pool hall and a liquor store. He died in 2014 at the age of 88.