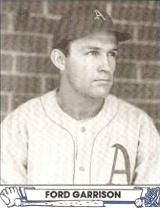 Outfielder Ford Garrison, who played four years in the majors, was the regular left fielder for the Philadelphia Athletics in 1944.

He served in the Navy during World War II. After his playing career ended, he was a Cincinnati Reds coach in 1953.