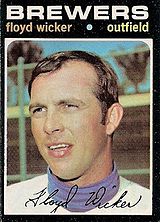 Floyd Wicker's only career home run came on September 26, 1970, playing for the Milwaukee Brewers against the Chicago White Sox. It came off near-namesake Floyd Weaver in the top of the 1st inning. Tommy Harper was on base and scored. He spent the entire 1969 season on the expansion Montreal Expos' roster, but only started one game in the outfield, and amassed a mere 39 at-bats, getting 4 hits while striking out 20 times.

Wicker missed the 1964-1965 seasons due to military service.