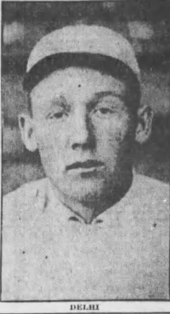 Flame Delhi not only has an interesting name, he was born in an interesting place, Harqua Hala, AZ. He was the first Arizonan to come to the major leagues, and as a result the Arizona chapter of SABR is named after him.

His debut was obscured by the fact that the Titanic had gone down the day before and the papers were full of that story.

Delhi was partly the source of some famous Ring Lardner stories, according to Ping Bodie, who roomed with him. Delhi had played in the Pacific Coast League. Later, he got a shot with the Pittsburgh Pirates and roomed with Honus Wagner, but never appeared in the majors with them.

Delhi was pitching for the opposing team the day that Walter Carlisle, playing in the outfield, pulled off an unassisted triple play.

After his baseball career, Delhi had a successful 22-year career with Western Pipe and Steel. He rose to the company's vice presidency and was in charge of shipbuilding operations. He was one of the leading proponents of arc welding and pioneered building all-welded ships with no riveting.