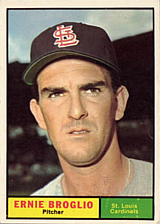 ". . . people forget: Broglio was a damn good pitcher. In 1962 and '63, he was 30-17 with a 2.99 ERA." - from Rob Neyer's Big Book of Baseball Blunders, pointing out in connection with the Brock/Broglio trade that Brock was not as good as many people think while Broglio was better

Ernie Broglio was a capable starting pitcher with the St. Louis Cardinals, winning 21 games in 1960 and 18 games in 1963, but he is most remembered for being part of one of the most lopsided trades in baseball history. Midway through the 1964 season, he was traded to the Chicago Cubs, along with two other players, for Lou Brock and two others. Broglio went 7-19 in two and a half seasons with the Cubs, but Brock went on to hit just under .300 and steal 888 bases in a decade and a half with the Cardinals, eventually ending up in the Hall of Fame. The Rob Neyer book quoted above notes that Brock had not been hitting well with the Cubs when he was traded in 1964. Broglio, for his part, had an ERA approximately the same as the team average for each of the two teams he played for that season.