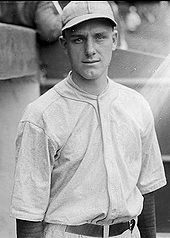 After his playing career ended, pitcher Eddie Rommel was a Philadelphia Athletics coach in 1933 and 1934. He later went on to become an umpire, serving in the American League from 1938 to 1959.

Rommel earned the last win of his career in a remarkable relief outing on July 10, 1932: on a day when manager Connie Mack had brought only two pitchers with him to Cleveland, he relieved rookie Lew Krausse after one inning, and pitched the next 17 innings until the Athletics beat the Cleveland Indians 18-17. During that game, he set records by giving up 29 hits and 9 walks in his 17 frames (also a record) and recorded the victory in spite of having given up 14 runs. Already 34 that day, he was able to pitch that long because the knuckleball put little stress on his arm.