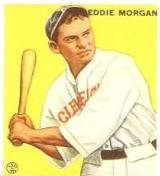 Nineteen-year-old Eddie Morgan was signed as an amateur free agent by the St. Louis Cardinals before the 1934 season and right off the bat had two good seasons in the minors. Eddie hit .294 in 87 games with the Greensburg Trojans of the Pennsylvania State Association in 1934 and went it one better when he hit .347 with 13 home runs in 112 games for the Bloomington Bloomers of the Illinois-Indiana-Iowa League in 1935.

Eddie started his major league career on April 14, 1936, with the St. Louis Cardinals, appearing in eight games and hitting .278 in 18 at-bats. Morgan hit the first pitch he saw on Opening Day 1936 for a home run. It was his only major league homer and he was the first player in Cardinals history to hit a home run in his first big league at-bat; the second would be Wally Moon in 1954. He spent the rest of the year with the Columbus (OH) Red Birds of the American Association, appearing in 118 games as an outfielder, hitting at a .299 clip and clubbing 19 homers. This fine showing caused the Brooklyn Dodgers to claim Eddie as the player to be named later to complete an earlier deal they had made with the Cardinals.

Morgan started the1937 season with the Dodgers, appearing in 31 games and hitting just .188. Unknown at the time this was Morgan's last run at the majors. He was sent down to the Louisville Colonels of the American Association and appeared in 60 games, hitting just .259. Eddie played with several AA clubs from 1938 through 1945, hitting over the .300 mark in three seasons, but never got another call from the bigs. He finished out his big league time with a .212 average appearing in 39 games.

In 1946 he started on a five-year (1946-1950) minor league player-manager life with five different teams in four different class C and D leagues. Eddie managed the Mt. Airy Graniteers club in the Blue Ridge League to a second-place finish in 1946 with a 59-45 record and hit .391 with 16 homers as a player.

Eddie was the head man for the Galax Leafs of the same league in 1947, leading his team to a first-place finish with a 74-47 record and also won the playoff title while hitting .375 with 11 homers for his part. In 1948 he took the Martinsville Athletics of the Carolina League to a second-place spot, just three games back but did win the playoffs, while hitting .373 with 30 four-baggers for his duties.

The Youngstown Athletics had the benefit of his work in 1949 finishing third with a 74-62 record in the Middle Atlantic League and Morgan hit .339 with 11 homers. Eddie finally came to the end of his 17-year minor league career when he and Woody Wheaton brought the 1950 Welch Miners in with a sixth-place finish in the Appalachian League at 46-76. Although personally Morgan hit .399 with 12 homers, he brought his playing and managing career to an end.

Including his managing years Eddie ended his career in the minors with a .313 hitting average and 172 home runs while appearing in 1,820 games. Morgan was always around baseball but returned home to his native Ohio where he died on June 27, 1982 in Lakewood, OH.