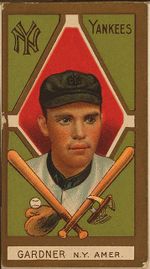 Earle Gardner played five seasons for the New York Highlanders in the years immediately before they became known as the Yankees. Defensively, he always played second base, but was never the regular except in 1911 when he appeared in 101 games at second base for the team.

Gardner was born, and died, in Sparta, IL, a town in southern Illinois southeast of St. Louis, MO. In addition to his major league years, he had twelve seasons in the minors, often hitting around .300. He got his first shot at the bigs after hitting .302 in 1908 for the Hartford Senators.

Earle bears the same name as the famous mystery writer Earle Stanley Gardner, inventor of the Perry Mason character, and was also born in the 1880s, but whereas Earle the ballplayer was from Illinois, Earle the mystery writer was born in Massachusetts.

A site about the Hartford Senators refers to Earle the ballplayer as "muscle bound" [1], but he hit for little power in the big leagues and the minors. A site about Russ Ford says that Gardner told Cy Falkenberg about Ford's emery ball which considerably helped Falkenberg's career. [2]