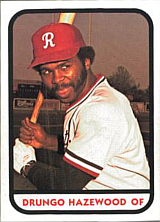 "He was the next Mickey Mantle. I used to take his cutoff throws from right field and it was like it came out of an absolute cannon. Some of the bombs he hit were devastating, probably 500-plus feet. The guy was unreal." - Scott Christopher, minor league teammate

Drungo Hazewood played six games for the Baltimore Orioles in 1980 shortly after he turned 21.

Born in Mobile, AL, he attended school in Sacramento, CA. He was a first-round selection by the Orioles in the 1977 amateur draft. Drungo played outfield in the minors, beginning in 1977 at age 19. He showed some power, hitting 97 home runs in seven minor league seasons. His peak was 28 for the Charlotte O's in 1980. He also had some speed, stealing 29 bags one year for Charlotte and 28 another year. His major flaw was lack of contact - each minor league season from 1978 to 1982 Hazewood struck out at least 100 times including multiple years where he led his league in strikeouts.

He returned to Sacramento after his playing career and worked in the trucking business. He had seven children. He died after a long battle with cancer in 2013, aged 53.

A restaurant in Austin, TX, the Drungo Ice House, was apparently named in his honor.

"I've never cut a guy hitting that high before. But he was making the rest of us look bad with that average." - quote attributed to Earl Weaver in 1980 when he demoted Drungo Hazewood to the minors although he was hitting .583 in spring training (source: Baseball Digest, Sept. 2000)