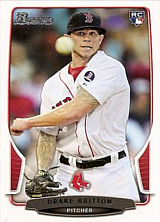 The first-place Red Sox called up Britton when Jackie Bradley Jr. was sent down; Boston felt Britton would add another lefty option against the lefty-heavy Oakland Athletics. In his major league debut against the New York Yankees on July 20, 2013, Drake relieved Pedro Beato with two on, none out and a 4-2 deficit in the 9th. He retired Ichiro Suzuki after Luis Cruz stole third but a sacrifice fly by Robinson Cano scored Cruz. With Lyle Overbay up, Brett Gardner was caught stealing to end the inning. In 19 big league appearances, he posted a 3.86 ERA in 21 innings. He made 7 scoreless appearances as a September call up in 2014, the last time he sniffed the big leagues. Waived prior to the 2015 season, Drake was claimed and outrighted by the Chicago Cubs, spending the season in Triple A Iowa. He moved to the Detroit Tigers chain for 2016 and drew a 50 game suspension after a violation of the Major League Baseball drug policy. Effectively cooked in organized baseball by the ban, he completed his career with two seasons in the Atlantic League (2017 and 2018).