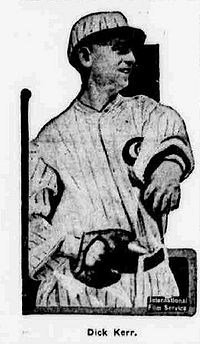 Dickie Kerr pitched 16 seasons in Organized Baseball from 1912 to 1927, four in the Major Leagues and 13 in the minors, with five years in independent ball. Unaware of the intrigue around him, Kerr pitched and won two games of the 1919 World Series for the "Black Sox". Hall of Fame catcher Ray Schalk who caught Kerr in the 1919 World Series, referred to him as "Little Giant", which led to newspapers calling him "The New Napoleon". In 1922 the Chicago White Sox cut Kerr's salary by $500. Dissatisfied with his new contract, he asked for his release, and then quit. Kerr was placed on the permanent ineligible list by Commissioner Landis, but was reinstated in 1925. From 1922 to 1925, he pitched "Outlaw ball". He coached Rice University in 1928.

After ten years in the cotton business in Texas and Arkansas, Kerr managed in the minors until he became a St. Louis Cardinals scout in 1946. In 1940 while managing the Daytona Beach Islanders in the Florida State League, one of his pitchers came up with a sore arm. Being fairly decent with a bat, Kerr convinced him to become an outfielder. That washed-up pitcher went on to become Hall of Famer Stan Musial. Kerr became embittered that he had not been named to the Hall of Fame even though he did not meet eligibility requirements - his oftsaid quote, "All baseball ever gave me was the boot". He lived in Houston, TX for 30 years and was a retired office manager for B and M Electrical Company. Two years prior to his death, he was honored at Houston's first Major League banquet and award the winner of its Tris Speaker Award. He died at his home, a house given to him as a birthday present by Musial, at age 69 of cancer. Survivors included his widow, two brothers and an adopted son. He is buried at Forest Park of Lawndale in Houston.