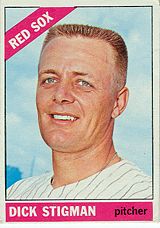 In 1965 and 1966, Dick Stigman became the first pitcher ever to make ten consecutive starts without a decision. This is still a record, although it has been tied by Randy Lerch and John D'Acquisto, both in 1977.