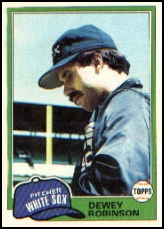 Pitcher Dewey Robinson was selected by the Chicago White Sox in the 19th round of the 1977 amateur draft. He appeared in parts of three major league seasons with the White Sox (1979-1981) and finished with a 2-2 record to go with a 4.05 ERA over 30 relief appearances during the span. Robinson's minor league stat line over six seasons (1977-1982) showed a 30-24 win/loss record along with 58 games saved. His brother Brian Robinson made it to AAA.

After his playing career, Robinson was an assistant coach at Northwestern University (1982-1983) and University of Missouri (1984-1986). He then worked at various levels of the Chicago White Sox organization from 1987 to 1996, including 1993 and 1994 as bullpen coach of the White Sox. In 1997 he joined the Houston Astros as their minor league pitching coordinator and was subsequently named director of pitcher development. In the 2008, he returned to the Major Leagues as the Astros' pitching coach, holding the job in 2009 as well. In 2010-2014 he was a minor league pitching coordinator for the Tampa Bay Rays. He was eventually promoted to Director of pitching development. In 2022, he was hired by the Pittsburgh Pirates as a special advisor for pitching development.