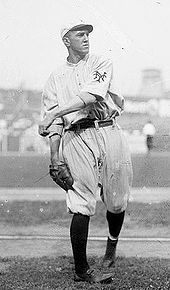 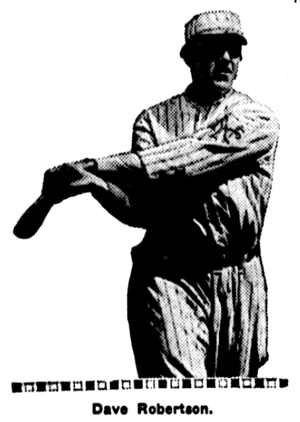 "McGraw fined me for disobeying orders." - Dave Robertson's description of what happened in 1915 when he hit a home run after John McGraw had signaled for a bunt

Dave Robertson played nine seasons in the National League, twice leading that league in home runs during the dead-ball era. In the 1917 World Series he hit .500.

Robertson was the first player to the come to the majors out of North Carolina State University, where he attended in 1910-12, starring in baseball, football, basketball and track. Appearing with the 1912 New York Giants for three games, he went 1-for-2 with the bat.

He spent 1913 in the minors at Mobile, hitting .335, and came back to the majors in 1914. After several years with the Giants, he was traded in the summer of 1919 to the Chicago Cubs, where he would stay through the summer of 1921. He had a good year with the 1920 Cubs, posting the highest OPS+ among the regulars.

He then played a number of years in the Virginia League, batting over .380 with power in each of 1925-26. In later years he also played for York and Norfolk.

One source: Baseball in the Carolinas.