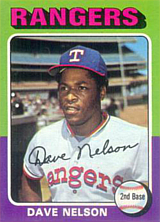 On August 30, 1974, Dave Nelson of the Texas Rangers stole second base, third base, and home plate in the same inning. He scored the last ever run by the Washington Senators at RFK Stadium in 1971.

After his playing career ended, he was a coach for Texas Christian University in 1980 and a Chicago White Sox coach from 1981 to 1984. He was the White Sox minor league infield and baserunning coach in 1985, and Director of Instruction for the Oakland Athletics in 1986-1987. Nelson was a radio commentator for the Chicago Cubs in 1988-1989. He was the minor league baserunning instructor in 1990-1991 for the Montreal Expos organization. Nelson was a member of the Cleveland Indians staff from 1992 to 1997. Moving back to radio, he announced Indians games in 1998-1999. He joined the Milwaukee Brewers organization in 2001 and was the team's first base coach from 2003 through 2006. He later worked in the Brewers' front office as director of alumni relations, as well as a broadcaster for the team and Fox Sports Wisconsin off and on from 2007 until his passing.

He was active in various charities after his retirement, including founding a boarding house for South African kids left orphaned by the AIDS epidemic, the Open Arms Home For Children. He passed away from liver cancer in 2018 at the age of 73.