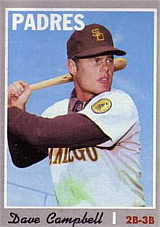 Dave Campbell was a utility infielder with four teams in an eight year career. His bat was particularly anemic, even for a deadball era, and derailed any aspirations of regular play. In 428 games, he hit just .213/.272/.311. He found greater success as a broadcaster, beginning in the late 1970s as part of the San Diego Padres booth. A former staple of ESPN's Baseball Tonight, he worked for the worldwide leader from 1990 to 2010, also seeing time in the booths of the San Francisco Giants and Colorado Rockies. Along with Matt Vasgersian and Rex Hudler, Dave provided voiceover work for the 2007 to 2012 iterations of PlayStation's MLB: The Show franchise.