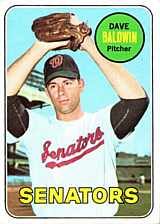 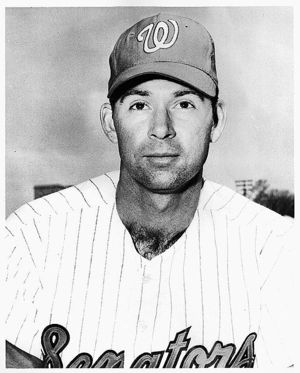 "I'm the pitcher who throws funny." - Dave Baldwin to Richard Nixon, meeting with members of the Washington Senators

After his six year big league career came to its end, pitcher Dave Baldwin obtained a PhD in genetics and an M.S. in systems engineering from the University of Arizona. He worked as a geneticist, engineer, and artist until his retirement in 2002. Baldwin was a sidearmer at a time when unorthodox pitching deliveries were widely frowned upon and discouraged. He had been a typical hard thrower in the college ranks, but an elbow injury and subsequent lack of success in the minor leagues made him change his approach. It worked well enough for him to reach the major leagues at the relatively late age of 28, seeing most of his action as a member of the second iteration of the Senators

Dave's baseball memoir, Snake Jazz, was published in 2008, and his book of poetry, Limbic Hurly-Burly: Poems of Humor and Paradox (published under the pen name DGB Featherkile), was published in 2009. He also authored a number of research articles on the physics and psychology of the batter/pitcher confrontation. In addition, his painting "Fugue for the Pepper Players" hangs in the National Baseball Hall of Fame in Cooperstown and is featured in John Thorn's 1998 book Treasures of the Baseball Hall of Fame.