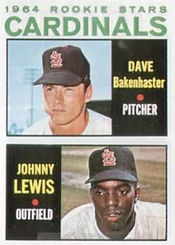 Pitcher Dave Bakenhaster played one game in the major leagues with the St. Louis Cardinals in 1964. Two years later, on June 14, 1966, he was the starting pitcher for the St. Petersburg Cardinals in a game against the Miami Marlins that turned out to be the longest in organized baseball history (at the time). He gave up 2 runs in 9 innings, but was long gone by the time the Cardinals lost the game, 4-3, after 29 innings; the game having lasted until the early hours the next day.