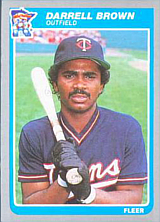 Darrell Brown was the regular center fielder for the Minnesota Twins in 1983, then played 95 games for them as their fourth outfielder in 1984. A good defensive player who hit for a decent batting average, he had no power and drew few walks while not stealing many bases, which kept him from holding on to a job in the longer term. In 210 major league games, he hit .274/.304/.325 in 591 at bats. He later became a scout, signing Mike Hinckley and Josh Johnson among others.