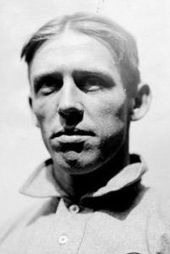 "Danny Hoffman, the center fielder of the St. Louis Browns, is one of the speediest outfielders in the business. He is a fine heady batsman. Besides being a fine fielder, Hoffman is a base runner of first flight." - from The National Game

Hoffman was born in Canton, CT and played in the Connecticut State League as well as for Toledo before he came to the majors.

In 1904 he was knocked unconscious by a fastball to the temple. The pitch by Jesse Tannehill nearly killed him and damaged his eyesight, but he returned to play seven more seasons, although his hitting was affected.

Danny was primarily a centerfielder and he had speed. He led the 1905 American League in stolen bases. He also was close to the league lead in two categories in 1907: he was second in homers and third in hit-by-pitch.

He was part of a team of all-stars who went to Cuba in 1909 to play against Cuban teams.