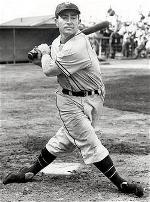 Outfielder Danny Gardella played for the New York Giants in 1944 and 1945, hitting .272 with 18 homers and 71 RBIs the second year. In 1946, he jumped to the Mexican League and was banned from the majors by Commissioner Happy Chandler. The next year, he filed a federal lawsuit challenging baseball's reserve clause. In the light of the legal challenge, Chandler revoked Gardella's ban, and Gardella dropped his lawsuit. He played in just one more big league game, with the St. Louis Cardinals, in 1950. He was also a talented opera singer.

He was known for practicing with an iron bat to strengthen his muscles. Gardella died on March 6, 2005 at age 85 of congestive heart failure.

His brother, Al Gardella, played in a handful of games for the 1945 Giants.