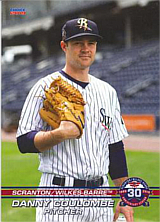 Danny Coulombe is a pitcher who made his major league debut with the Los Angeles Dodgers in the final days of the 2014 season after starting the year in Class A with the Rancho Cucamonga Quakes. It was in being moved to the Oakland Athletics the following season he started to see regular activity. After striking out 54 hitters in 47 2/3 innings in 2016, he was the A's de facto LOOGY in 2017 with a 2-2, 3.48 record in 72 appearances (51 2/3 innings).

Coulombe's grandfather, Bertrand "Frenchy" Coulombe, was a flight engineer in the United States Air Force during World War II. He was part of the crew of a B-17 bomber that was hit by enemy fire during a bombing raid over Germany; a German fighter plane came up behind the aircraft, but declined to shoot it down, sparing the crew from almost certain death. Years later, the pilot was identified and met his American counterpart, the story being turned into the book A Higher Call, by Adam Makos.