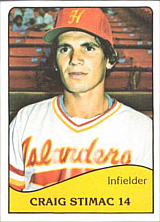 Grosseto retired Stimac's number 23 months after his death; it was the fourth number the franchise retired.