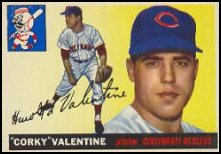 In his autobiography, Hank Aaron recalls Valentine as being the most ornery character in the league - "I'm not saying he was a racist; I think Corky Valentine just hated everybody." Aaron writes that "[t]he scary thing, though, is that he eventually became a policeman somewhere in Georgia. That's enough to make you drive fifty-five."

Valentine served for many years on the Atlanta Police Department before joining Fulton County's police force.