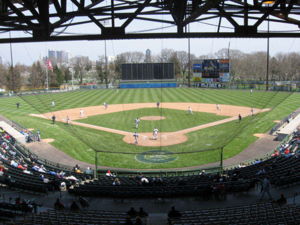 Cooper Stadium in Columbus, OH, was the home of Columbus affiliated baseball from 1932 through 2008. After that, the Columbus Clippers of the International League moved into a new downtown ballpark.

Opened in 1932, then Red Bird Stadium - named for its original occupants, the Columbus Red Birds - changed teams and names when the Birds moved to Omaha, NE, after the 1954 season. Red Bird Stadium was known for its huge outfield - left field was 457' away and only Ralph Kiner and Joe DiMaggio managed to hit a ball over the wall there. Among the attendees of the first game were Branch Rickey and Kenesaw Mountain Landis.

Harold Cooper, a Red Birds clubhouse boy in 1935, kept Columbus from going without baseball in 1955 by putting together a group to buy the Ottawa Athletics and move them to Columbus, and also purchase the stadium itself from the St. Louis Cardinals. Cooper was general manager of the resulting Columbus Jets, with the ballpark becoming Jets Stadium. Cooper left the GM post after the 1968 campaign, but two seasons later Columbus officials refused to renovate the park at taxpayer expense and the suddenly untenable Jets were sold moved to Charleston, WV to become the Charleston Charlies.

In 1977, at taxpayers' expense, Cooper Stadium was renovated and expanded, renamed Franklin County Stadium, and landed an open IL franchise that became the Clippers. Cooper became president of the circuit the next year, and in 1984 the county renamed the stadium for him. It also became the first stadium in the minors with Astroturf that year, but went natural again in 1998. The post-Clippers plan to redevelop “The Coop” into a race/car-test track stalled out, replaced in 2019 by a proposed mixed-use development that also has so far not gotten off the ground.