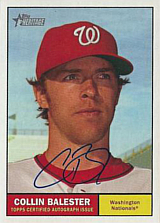 Collin Balester was signed by the Montreal Expos and scout Tony Arango as the 4th round pick in the 2004 amateur draft. His father owned a surfing supply shop in Huntington Beach, CA, and Collin was an avid surfer in his youth.

Balester was a member of the Washington Nationals starting rotation over the second half of 2008, making 15 starts and throwing 80 innings. He was doing relatively well until his last two starts of the year when he was hit very hard, giving up 12 earned runs in less than 7 innings to push ERA from a respectable 4.33 to 5.51, the figure at which he ended the season. His record stood at 3-7, with 50 strikeouts and 28 walks. He found himself on the Triple A shuttle for the rest of his playing days. He converted to relief pitching in 2010 and was designated for assignment in the summer of 2011, being dealt to the Detroit Tigers that offseason. His big league career ceased after a stint with the Cincinnati Reds in 2015.